Last time we covered expressions and a little more of XAML interop. This time we will be covering something pretty exciting… video! We’ll be going through how play a video using the Windows.Media.Playback API along with Composition. Because we will be displaying the video through Composition, we’ll also have some fun with applying what we’ve learned before about animations and effects. It’s important to note that this topic is limited to those on the Anniversary Update for Windows 10, which at the time of writing you can get through the Windows Insider Program.

Before we start, I do want to give you an update on the post about page transitions. In the interest of properly covering the material, I’ll be chopping the topic up into multiple parts and breaking it down to its core concepts. Part of the delay has also been because while I was writing the blog post I also got some inspiration into making a lot of the techniques used in the post into a library. So bare with me on the delay, and I do apologize for that! You should look forward to more regular posts (hopefully not any longer than every other week).

Back to the fun stuff.

New to the Anniversary update to Windows 10 is the MediaPlayer object in the Windows.Media.Playback namespace. I’m personally a huge fan of this addition, as it comes with a lot of goodies that we’ll cover in the future. For now, however, we’ll just be covering how this class relates to the Composition API. Before we can place a video in a visual, however, we need to be playing a video first!

As always, I’ve set up a project you can look at here to follow along.

You’ll notice that the first thing we’ll be doing is creating a local MediaPlayer in our page’s C# code. Unlike MediaElement, MediaPlayer is not a XAML control. It is possible to use the MediaPlayerElement if you want the new functionality but you also want something that goes into your XAML tree. We’ll be focusing solely on MediaPlayer. All we have to do is create one and we’re already halfway to playing video.

Next is to select the video we’ll be playing. You’ll notice that I’ve added some buttons to the page’s CommandBar, with one of them being an “Open Video” button. In the event handler for that button, we’ll allow the user to pick a video of their choice by using a FileOpenPicker. First we need to crate our picker and configure it to start at the user’s video library and to set the filter to only show video files that we specify.

After that we’ll show the picker to the user. If the user successfully selects a video, we’ll turn it into a MediaSource which we will use to create a MediaPlaybackItem.

Inside of PlaySource, we create our MediaPlaybackItem and set that to our MediaPlayer’s current source. Once we wet the video as the source, we also tell the MediaPlayer to begin playing.

However, if you were to run the application in its current state, you would be able to hear the audio… but nothing would show up! For that we’ll be switching over to the Composition API. To get ready, we’ll create a EnsureComposition method that will make sure our Compositor and SpriteVisual are ready.

So if we can get a video as a surface, we can display it using the Composition API. At its core, playing a video is flipping a swapchain, which you can put into a surface for use with the Composition API. However, that’s an advanced topic that we would need to cover in a future post (and primarily would leverage the C++ media APIs along with DirectX). For now if you want to know how to roll your own that way, you can check out this overview of interoping DirectX with the Composition API, and particularly you can check out the ICompositorInterop interface which provides both CreateCompositionSurfaceForHandle and CreateCompositionSurfaceForSwapChain. At this point I’m sure you’re asking: “But surely there is an easier way, right?”

Have no fear! Our MediaPlayer comes equipped with a GetSurface method, where you can pass in your Compositor and get back a surface. We only need to do this once for our MediaPlayer, so we’ll put this into a method called EnsureVideoSurface. To get a surface that represents your video, all you have to do is the following:

It’s that easy! After we pass in our Compositor object to MeidaPlayer, it will generate a swapchain surface and hand it back to us. From there all we have to do is create a CompositionSurfaceBrush and attach it directly to our SpriteVisual!

Now if you run the application you should see the video playing! 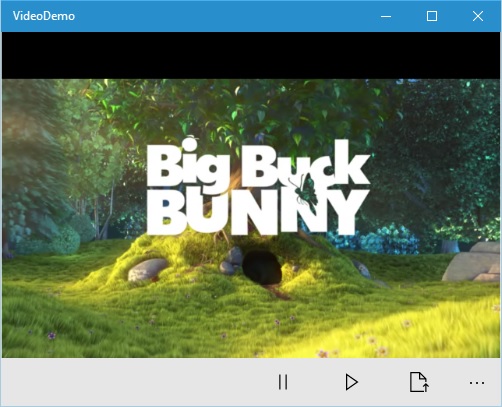 Because this is a regular SpriteVisual, you can do anything you want with it! Rotate it, animate it, move it, place an expression…. anything! One of my favorites is to apply an effect to our video.

If you remember effects from our last discussion of the topic, then the rest of this will look really familiar. Essentially none of the steps are different, and all we need to do is supply our brush that contains our video to the effect. Inside of EnsureComposition we’ll create our effect factory and effect brush:

Next, we’ll remove the line where we assigned our video brush to our visual and instead set it as a parameter to our effect.

Finally we’ll add an AppBarToggleButton and an event handler for it. If the button is active, we’ll animate the HueRotation effect. If it’s not active we’ll just set the Angle to 0 to turn off the effect. We’ve also disabled the button if the user hasn’t loaded a video yet.

Now you should be able to turn on and off the effect at will!

If you want to play with more effects on videos, feel free to check out the Video Playground sample I wrote on the WindowsUIDevLabs GitHub page!

As always, make sure you’re subscribed so you never miss a post! Additionally let me know on twitter or by email if you have any questions or feedback. Next time we’ll be discussing the anatomy of a XAML application from the perspective of the Composition API, which should make XAML/Composition interop easier to understand.