A while back I put up a poll on Twitter asking you all what you would like to see me cover next. The people have spoken and we’ll be covering Implicit Animations! Don’t worry, we’ll also be covering those other topics later! Implicit Animations were added in the Windows 10 Anniversary Update as part of the Composition API. We’ll first cover the basic concept behind implicit animations, then we’ll cover the need for implicit animations, and finally we’ll put together a little demo that shows off the new feature!

What are Implicit Animations?

Implicit Animations, on the other hand, are animations that are triggered by changes in the target property. This means that if you were to set the Offset property of a Visual that had an implicit animation defined, then all subsequent changes to Offset will cause an animation between the old value and the new value that was set.

So how do you create an implicit animation? At the core we still use the same animation objects that we would previously:

Right off the bat, you’ll notice some differences. The first is that there is a new Target property to our animation object. I’ll explain why this is needed for now, but just know that we specify the property we intend the property to be used for. Next we use InsertExpressionKeyFrame (rather than InsertKeyFrame) to specify a key frame. When using implicit animations you don’t need to set a key frame for the beginning of the animation, as that is implied. We do specify, however, the end of the animation. Here we use an expression key frame so that we can reference the final value of the property (remember, these animations will run because the target property is set by something/someone). The way we reference this final value is by using the string “this.FinalValue”. After that we specify how long this animation should run for. Next, we set up our ImplicitAnimationCollection.

Pretty neat, right? Well, we’re not done yet. Remember that Target property that was on our key frame animation object? You may be asking why that’s even there. What’s the point if we’re just going to specify it on the ImplicitAnimationCollection as well? Great question! That’s because you’re not limited to animating the value that is changing, and that you’re only triggering the animation from the property change. If you wanted to, you could animate the RotationAngle every time the Offset was changed. Or even better, you could do both!

Let’s spin our visual around while it’s moving. To do this, we’ll need to create a new key frame animation:

Notice that we didn’t do anything special for this key frame animation. You’re not required to specify the “this.FinalValue” value, and can supply any animation you want. Next we create the CompositionAnimationGroup object and add our animations:

The CompositionAnimationGroup can then be used in place of our single animation:

Now our visual spins as we move it!

At this point, you may be saying to yourself “that’s nice and all, but I could also do that explicitly, what do I gain with Implicit Animations?” It’s true that this example could of easily applied both animations on the button press, instead of relying on Implicit Animations. Generally speaking, when you have complete control over your visuals, you may not need to use Implicit Animations. But what if you’re not the only one setting values?

Why use Implicit Animations?

You might recall that we made some changes to the way XAML-Composition interop worked, and we covered those changes last time. Starting in the Anniversary Update to Windows 10, the visual that is returned by ElementCompositionPreview.GetElementVisual is the same visual that XAML uses to do layout. This means that with Implicit Animations, you can have your UIElements animate between their offset values every time XAML changes their position when it computes layout. One example of this is during a resize.

I’m sure you can imagine having the elements of a GridView animate to their new position every time you resized your window, instead of just snapping into place. In short, Implicit Animations are the most useful when you don’t have full control of the visual you wish to animate. This way you can guarantee an animation without being the one to consciously kick of the animation each time.

Before we jump into an example, it’s important to go through some of the limitations of the Implicit Animation system:

The first one is pretty straight forward, and we’re continually working to expand the support of the Implicit Animation system. However the second one might seem a bit foreign to some of you, which menas it’s time for a history lesson.

In the Composition API, we opted to move to a model with an implicit commit. In this model, Commit is regularly called on behalf of the developer. For the most part, you won’t have to worry about commits, as we’ve design the API for commits to be largely invisible. However, they do tangentially come up when using the Implicit Animation system. We don’t honor implicit animations that have been set on the first commit that they’ve been created/assigned. What does that mean? It means that you can’t set the implicit animation on one line, set a property on the next line, and then expect to see the animation happen. Why is that? It’s because we expect the implicit animations to be set at the same time a visual is created, and that could lead to (depending on the order of the calls) properties animating from their default value (0 in most cases) to their “real” first value during initialization.

Imagine all of the items of your GridView animating to their position from the top left corner of their parent to their first position every time you load your app. Yikes! To prevent that, we decided to ignore implicit animations on the first commit they are assigned to a visual. What does that mean for you? Ideally, not much. We expect the Implicit Animation system to be leveraged to animate values in (direct or indirect) response to user input, like resizing a window, which would happen well after the first commit if you set them up during initialization.

My personal advice on this is to not worry too much about it. I just thought I’d share this in case someone comes across this while trying to use the Implicit Animation system in some interesting way! If you use implicit animations to trigger layout animations, you should be just fine! You can read up on commits (specifically in relation to the Composition API) here on MSDN. If for whatever reason you would like to know when your current “batch” will be committed, you can use the CompositionCommitBatch, which you can read up about here.

Now with that out of the way, we can finally get onto our XAML-Composition interop sample using Implicit Animations!

Let’s say that we have a collection of colors arranged in a GridView, a sort of simple color picker: 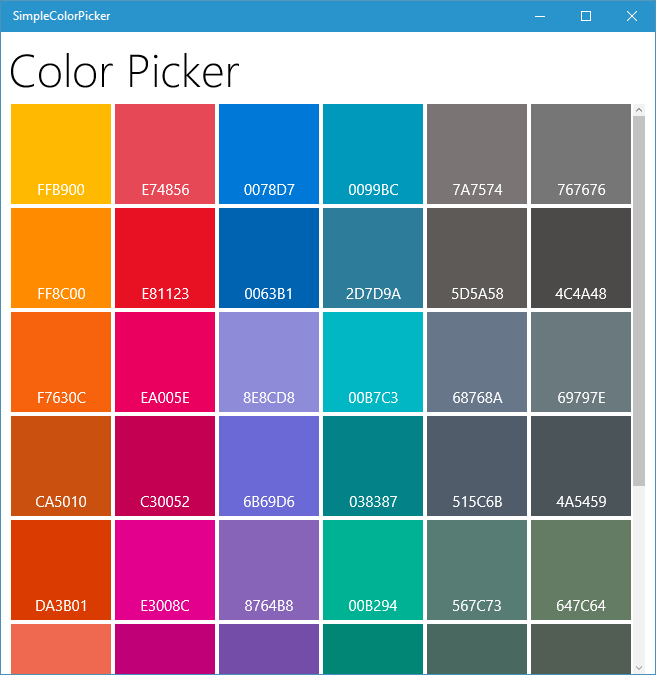 The first thing we’ll want to do is hook into our GridView’s ContentChanging event:

Now our color squares should fly around when we resize the window!

However, there’s one more thing I’d like to cover before we wrap up. Now that there has been 3 major releases of Windows 10 (Original Release, November Update, and Anniversary Update), I think it’s time to talk about how to make sure your apps still run on older versions of Windows 10 while still taking advantage of new features. You’ll notice that this demo project is targeting the Anniversary Update (build 14393), but it has a minimum version of the first release of Windows 10 (build 10240). So how do we make sure that this still works without blowing up when an unsupported API is called? The solution is the ApiInformation.IsTypePresent function. It will return true if the API is available. It’s important to note that this isn’t just for different versions of Windows 10, but also to check if features are supported on the device you’re on. Not all APIs are available to all platforms, and while that list shrinks with every release, please check MSDN to see what calls you should wrap with ApiInformation calls.

As long as you don’t call code that isn’t supported, it’s ok for the code itself to “exist” in the app. In our case, since both the initialization and application of our implicit animations are centralized in the ContentChanging event handler, we can add our call to ApiInformation there:

Now if you run this app on builds 10240 or 10586 (the November Update) the app won’t crash when you run it! It won’t have the implicit animation, but your users will appreciate still being able to use your app.

And that does it for this time. Thanks for reading! If you’d like to keep up to date with the blog, make sure you’re subscribed to the RSS feed. As always, feel free to ask me questions on twitter or by email. Also feel free to come by the team’s GitHub page to ask questions as well. See you next time!