Welcome to the Composition API! If you’ve watch some of the //build talks the past two years you may have seen some members of our team show off the new API. While the API is certainly new for Windows 10, the Composition team has actually been around for awhile…

UPDATE 04-14-2016: @NicoVermerir made a great suggestion involving the use of nameof, check it out bellow.

Since Windows Vista, the DWM has been powering the Windows experience. Everything you see on the screen we almost always have some hand in drawing. Developers were able to (and still are!) leverage the system compositor using Direct Composition. DComp, as we call it, was a way to position elements (that we call Visuals) on the screen in a tree like structure. For any of you that know the concept of the Visual Tree in XAML, this should sound familiar. The API was C++ only, and when Windows 8 came around there wasn’t a way to use the API in the new modern app world. This is where the Windows.UI.Composition API came into existence with Windows 10, as a way to leverage the DWM to make fast and beautiful user interfaces without breaking the perf bank.

For a more in-depth look at Composition as a whole, our friend Kenny Kerr wrote a great article that you can check out here.

While it is possible to create a “pure” Composition app, many of you will be delighted to know that you can actually consume the API from within XAML! This is a way to manipulate your pre-existing applications to add rich new experiences without much code. The very first thing you’ll want to do is to grab the Visual that represents a UIElement. For many of you, this method will become your best friend:

What exactly is a visual?

A Visual is a node in the Visual Tree, which means they can be the children of another Visual. However, there are different types of Visuals. First is ContainerVisual which inherits from Visual. ContainerVisual is different from Visual in that it can have children of its own. SpriteVisual inherits from ContainerVisual, which means that it can have children of its own but also host its own content. This content is applied using the Brush property on SpriteVisual. For the most part, expect to be working with SpriteVisual. Just like with XAML’s Visual Tree, Visuals are always relatively positioned by their parent. This also means that anything you attach to a UIElement will be placed on top of it. 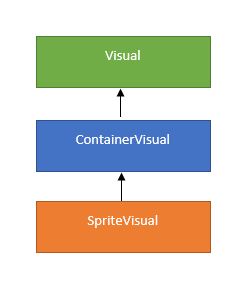 Comming back to the world of XAML, ElementCompositionPreview.GetElementVisual retreives the Visual that represents a given UIElement. Any UIElement, which even includes the Frame (this makes for some pretty neat animation tricks and transitions that we’ll cover in a later post)! Some things you should be aware of when getting a Visual from XAML:

The easiest thing to do is to create a SpriteVisual with a solid color, so we’ll start with that. After creating a blank XAML app, go to MainPage.xaml.cs and try something like this:

After we’ve retrieved the Compositor we are able to create a SpriteVisual. After that we set the visual’s size and give it an Offset (notice that you’ll need to be using the System.Numerics namespace for this). Finally we create a brush that just contains the color red and assign it to the visual (we’ll cover image loading in a future post next week). The only thing left to do is to attach it to the tree by using SetElementChildVisual. Just like with XAML, if it’s not in the tree it won’t draw.

All of that should get you this: 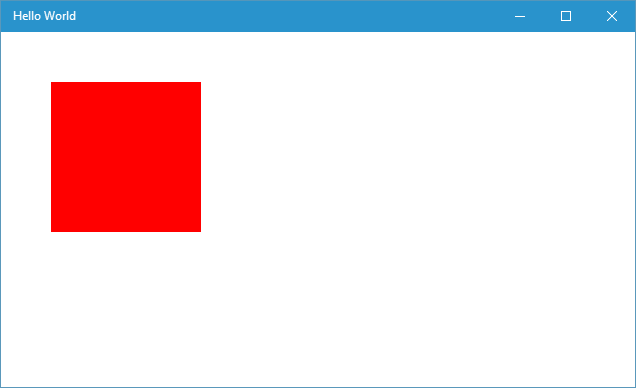 So far, so good. But I think we can do better. One of the strengths of the Composition API are the animations. Let’s try one of those next:

You may be wondering why we’ve jumped straight to animations, a seemingly advanced concept. Have no fear, as it’s actualy fairly easy using the Composition API! In this section you’ll learn how to create animations, and attach these animations not only to your own visuals but to XAML elements as well.

One of the animations available to us is the KeyFrameAnimation, which we can create by using the Compositor:

Next we’ll want to add some key frames:

The first parameter signifies a normalized time for that key frame, 0.0f being the beginning and 1.0f being the end (thus, you can’t assign something more than 1.0f for the first parameter). The second parameter is the actual value that the animation will set on a property. Depending on what type of KeyFrameAnimation you created the type of the second parameter will vary. Here we are animating a single float value. The third parameter is optional, but it allows you to specify what type of easing function you’d like. Heare we just want a simple linear function, but you can define other functions like a cubic Bezier curve.

Next we are going to set how long the animation will run:

Now all that’s left is to attach it to the visual:

Notice that starting an animation has two parameters, the first being the name of the property as a string and the second being the animation itself.

UPDATE 04-14-2016: Sometimes you’re up late and strings can be hard. @NicoVermerir made a great suggestion to use the nameof operator when referencing a visual’s property for use in an animation or expression. This is a great approach as it still gets you IntelliSense and is replaced at compile time, meaning that there shouldn’t be any difference in performance. To learn more about the nameof operator, check out this MSDN page. Thanks Nico!

XAML interop describes the act of mixing XAML and Composition. Here we’ll be taking the same animation we’ve already built and apply it to a XAML control.

In our XAML for the page, I’m going to add a Button:

Next is to set up our animation for our new button:

One thing to keep in mind is that because we’re using the button’s ActualWidth and ActualHeight properties we need to make sure the control is loaded before we try this out, otherwise it will report a size of 0. The easiest way is to move all of the code we’ve written to AnimatingButton’s loaded event handler. Here’s how it should look in the end:

And that’s it! That’s how easy it is to use the Composition API and have it interop with XAML.

You can find the source code for this project here: robmikh /blog.samples/2016.04.13/Hello World

If you’d like to learn more about animations, you can find that here.

Tune in next week where we’ll be covering how to use images with your visuals and how to apply effects! Make sure you don’t miss a thing by subscribing to the RSS feed. If you have any questions or feedback, feel free to reach me on twitter or by email. For Composition questions you’re also free to contact the team on twitter or file an issue on our GitHub page.